Walk or Hike on Hospital Grounds – One

The last couple of weeks, my husband and I have visited the grounds of two former state mental hospitals to walk or hike. You may say, what in the world…?

I am interested in the history of mental health treatment as it has been expressed through land and buildings. I became involved in the mental health world very peripherally in the early 1980’s when, as a commercial lender for a Philadelphia bank, my customer list included a number of community mental health/mental retardation centers (as they were then called). These organizations were formed to handle the needs of the population affected by the de-institutionalization process that happened in the 1970’s and later.

I learned quite a bit about the operations of those centers, of course, and that included the treatment programs of the clients. From that starting point, I was curious about the way things had been done previously, and did a lot of reading and learning about the asylum and mental hospital system and histories in our state and in the US.

To me, understanding and appreciating buildings is a way of understanding and appreciating the people who lived in or used them. I feel this way about every type of building, and I respect a building’s history as a way of respecting its people, all of them through all of its years. A way of finding connection. That is why I am here today, to pay attention to that connection.

Let me start with Norristown State  Hospital. I have mentioned this place quite often because of its connection to Norristown Farm Park, the associated farmlands that in the past, the patients worked, and which helped support the hospital. The hospital is now essentially closed down, with only a small section in use for the justice system; other buildings are rented out to various organizations, but most are empty, decaying, or torn down.

What will happen to the facility is now under discussion but its grounds are open for the public to walk in. In fact, you may remember a couple of years ago I did an orienteering event in the hospital grounds. The property is about 225 acres, and the buildings date from the hospital’s beginnings in 1879 to maybe the 1970’s, I would say.

Here’s what we saw on July 5, when we visited.

We parked in the Norristown Farm Park and walked over to the access point to the hospital grounds – the power house. You’ve seen this building before, but here it is from another angle.

We continued down the road and passed this little adjunct building. My husband told me not to pull on the half-open door, cautioning that someone might be inside, choosing it for a temporary place to sleep, maybe. I had no intentions of going neaer the door – though I was more concerned I’d disturb a snake or other animal.

Faded paint on the door says this is building 12. 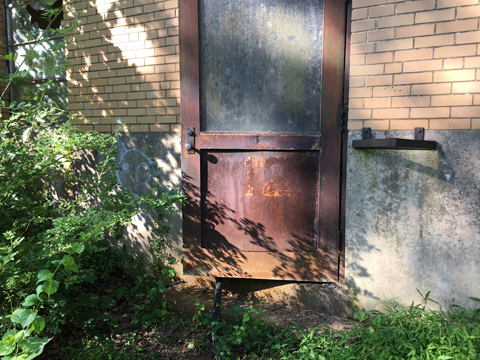 We passed under the freight rail line that crosses through the park. Stony Creek, which also flows through the park, is alongside the road. You may remember the farm had a trout hatchery, and that it is still in existence as a fishermen’s club, the Stony Creek Anglers. This area is very popular during fishing season.

As we came into the hospital grounds, we saw this uprooted tree. What an enormous set of roots it had. We have had several fierce windstorms this summer and it’s become pretty ordinary to see large trees toppled and lying on the ground.

The grounds are quite open now, since buildings have been torn down. 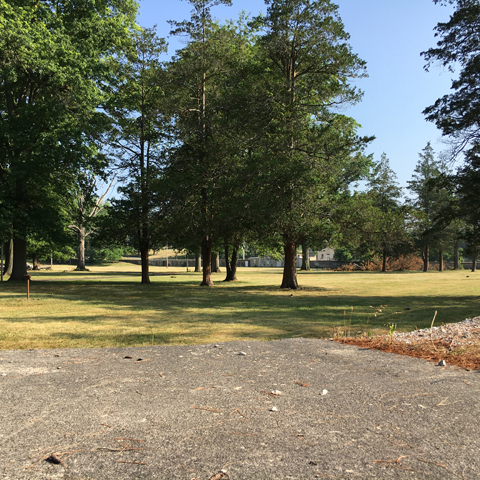 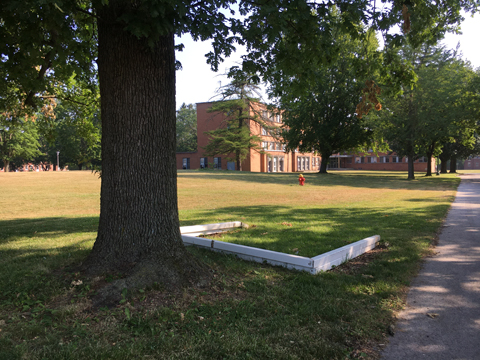 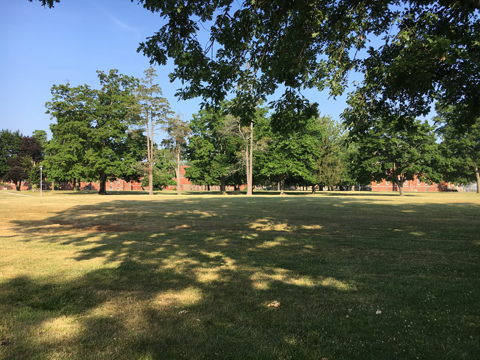 I won’t go in chronological order of our walk, as we kind of wandered around. I’ll just mention things we saw.

This is the main administration building, still in use. My photos do not capture it well, but there are lightning rods at the peaks of the building, and they are exquisitely made to depict flower. You can see there is also a lot of other ornamental ironwork and elaborate brickwork patterns. Apparently it also had a pointed roof on top of the tower, originally 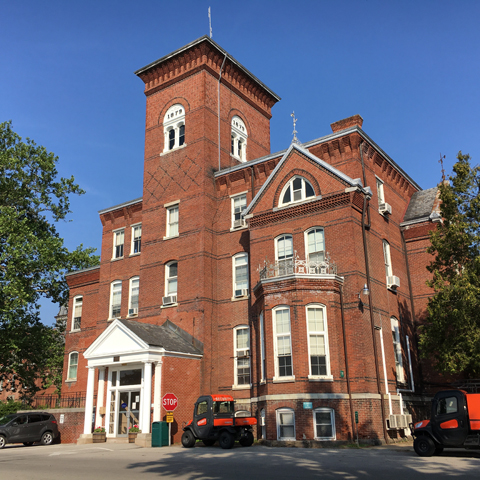 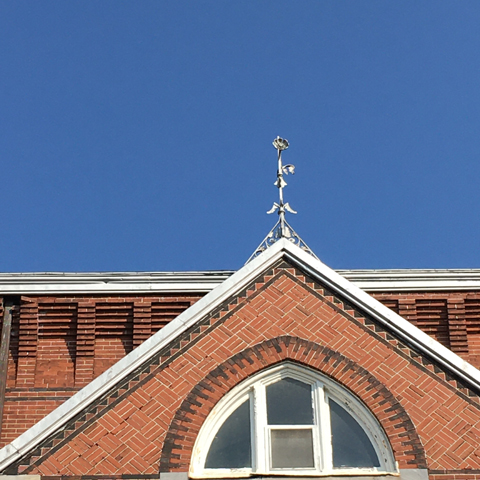 Tunnels connected the buildings, some underground, and some semi-raised, like this section. The buildings associated with them have been torn down, and the passages are like a wall around the open ground.

You can see that the tunnels also carry pipes for the utilities. 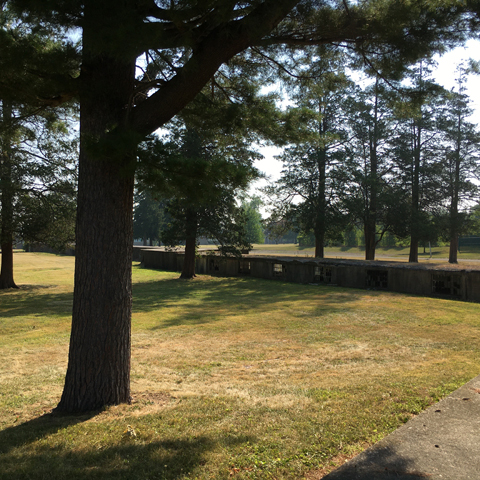 In this photo, I have turned around and pictured the medical building; the passageway I just showed you has dived totally underground and headed into an entrance inside the building. What looks like the sidewalk is the roof of the passage.

This ventilator is atop another passageway. It’s mini version of structures I’ve seen all over Philadelphia on the roofs of old industrial buildings and was the way light and air could be controlled in the pre-central heating and A/C days.

This building is still in use. I was taken by the simplicity of the sign: Store Room. It tells the whole story, you need to know nothing else.

The green shield-shaped sign to the left ofthe main sign, with the number 27, is an example of the signage throughout the hospital. My husband remarked how incongruous they seem – they look like highway number signs. For me, I find the signs a little chilling. Buildings do not have names – numbers only. Efficient, yes. Cold? I think so, yes.

Here’s something more cheerful. There is a community garden on the grounds. In the past, they have sold produce and flowers. This year, it hasn’t been possible, but the plants are growing. Someone is still looking after this garden in some fashion. And the flowers are cheerful and unruly. 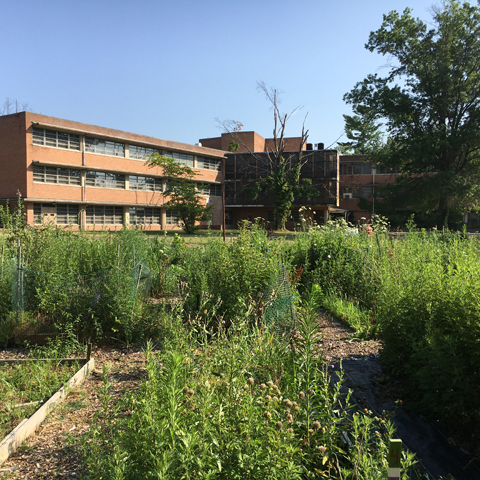 There is a large building referred to as the refectory, where the patients ate. It is enormous. 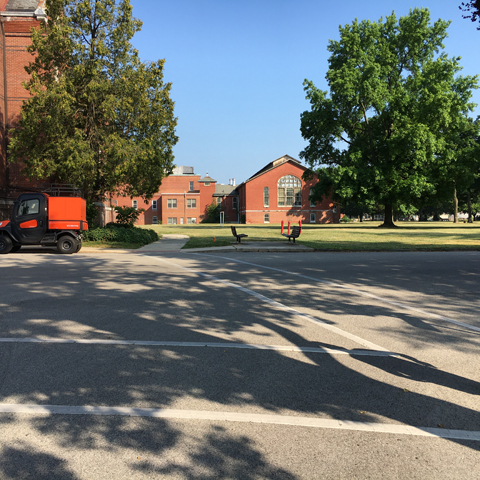 For a glimpse of it in use, look here at this vintage photo.

There were many buildings for patients’ residences dating from all eras of the hospital’s existence. The hospital’s peak population was about 5,000 people in the late 1940’s and they needed housing. 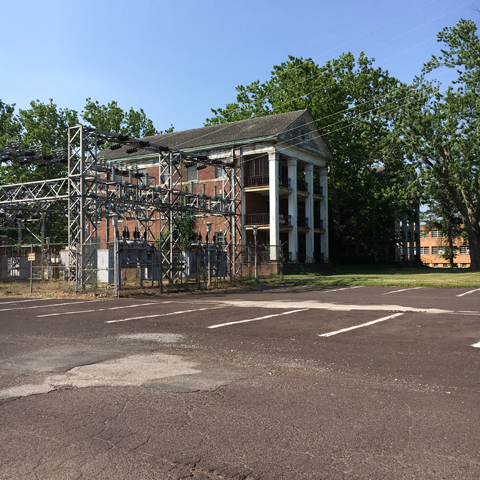 The world moves on and this place, like everywhere else, changes with events and with our participation in it. The past, though, continues to exist alongside us. Every time I come here, I reflect on the thousands of people who lived here. It is important to remember them. 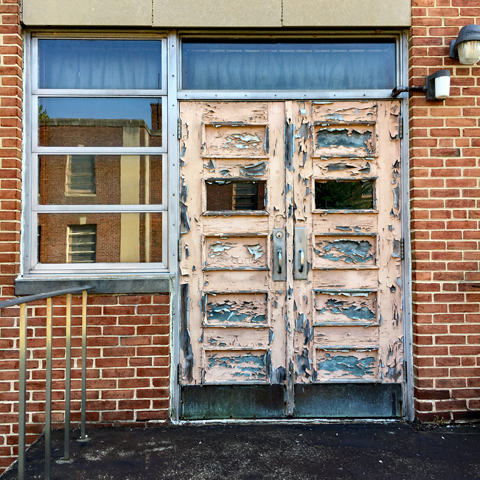 My post on my orienteering session in 2017, with more photos

Search this blog under the terms: Norristown State Hospital or Norristown Farm Park

A person who does art and writes poetry. That's me!
View all posts by Claudia McGill →

Posted in Ordinary? Yes But No

9 responses to “Walk or Hike on Hospital Grounds – One”